A breed standard in animal breeds is a set of guidelines which is used to ensure that the animals produced by a breeder conform to the specifics of the breed. It is the template to which the breed aspires. Not all sheep are born with the correct features or markings and absence of these does not prevent the breeder from registering the animal, but nevertheless, that registered sheep may still be deemed not to meet the breed standard.

The Zwartbles has good conformation, with a big frame, medium bone, good length and a wide pelvis.  A tall sheep, with a striking and naturally polled head, a long neck and an erect posture. It is an upright and fully built sheep with an alert and lively character.

Rams have a more muscular formed front part and a wider head.

a) Fleeces should be thick and springy with a good crimp, with a true black base colour (though naturally bleached brown tips and age-related grey may occur). The fleece does not grow onto the head which, like the legs, is covered with hair.

b) Blazes should be uninterrupted and reasonably straight and may be any width and may continue under the chin, but not into the wool. The white blaze should run from the crown of the head and may include the muzzle. Pink or black noses are acceptable.
c) Tails should be straight and have a readily discernible white tip which should not extend more than ½ the way up its length in both ewes and rams. (see diagram)

d) Two to four white socks – two of which must be on the hind legs. The sock should encircle the leg and touch the hoof at one or more places. Socks / stockings should not be above the knee or hock (See diagram) please note it is preferred that the white does not extend this far.

e) There should be no white in the fleece, on the ears or belly.

Ears:                 These must be proportionately large and should be placed horizontally to erectly. Drooping ears are undesirable.

Neck/Throat:    Necks must be proportionately fairly long and flexible, and the latter should be carried erectly. A ram’s neck must be more muscular and somewhat wider.

Shoulders:       These should be strong and slightly sloping.

Breast:              This should be well-developed and moderately, but not excessively, wide. Viewed from the side the breast should protrude between the front legs. An adult Zwartbles ewe should have stomach and udder at the lowest points.

Back:                With the erect head and neck the back should run straight with easily detectable vertebrae.

Legs:                These should be long with medium to fine bone and correct pasterns. Pasterns that are too upright or collapsed are incorrect. (See diagram). The legs should be hard and tight. Correct Zwartbles posture includes straight and equidistantly placed legs the front legs of good tall ewes tend to come in very slightly from the shoulder to the knee and then straight from the knee to the hoof,but should not be rotated outwards.

Genitalia:         The scrotum of a ram should be finely haired and not woolly. The testes should be well-developed, firm and of a similar size.

Registration into the Flock book:

Sheep with conformation defects, including but not restricted to the following, should be excluded from registration:

c) Twisted tails – this is a corkscrew twist of any degree, not a naturally broken tail

f) Arrow tipped tail – this has appeared in the Dutch flock and is described as a tail whose end vertebrae appear to have been squashed flat, as if ironed flat, like an arrow head at the end of the shaft.

Teeth :  It is most important that the teeth bite firmly and fully onto the pad on the upper jaw. 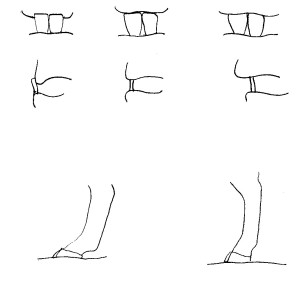