Harrrison and Hetherington held the eighth annual show and sale on behalf of the Zwartbles Sheep Association. After the previous evenings successful show of quality sheep the mood was upbeat and the sale kicked off with a packed ringside of people from near and far.

Beginning with three flock ewes bidding started well with a top of 250gns for A Baillie and T Jacksons Tardoes bred ewe (lot 3) selling back to its original breeder M Simpson Kilmarnock. Average £178.50.

Ewe Lambs were in strong demand with trade continuing at a fast pace with many attractive lambs finding new owners. The top price was achieved by M Campbell’s Blacklee Whin (lot 146) at 780gns selling to J Beckwith and Son Skipton followed by the Reserve Female Champion from G A and M Francis Pystill (lot 95) 0054-421W selling to J Porter Lisburn at 600gns also achieving this was a lamb from S and C Rae Dumfries, Wallacetown Wendy (lot 176) selling to L Crum  Ayrshire. Average £271.27

The sale then moved on to the rams where with the large number forward trade took a dip with buyers being selective and many being tricky to sell. Kicking off with the aged rams only two out of three were sold at a top of 380gns for (lot 220) from A Baillie and T Jackson selling to CJJ and JC Cookson Kendal and for (lot 223) from J Erskine 360gns selling to SR Plum Darlington. Average £388.50.

Topping the ram trade was the Reserve Supreme and Male Champion Broomfield Trickster (lot 233) a shearling again from A Baille and T Jackson Lanarkshire this sold to J G McIntosh and L Crum Ayshire. This was followed by Charles Scott’s East Middle Take Over (lot 248) at 950gns selling to A Lloyd Conway. Then selling at 620gns from A Duckworth Wolfclyde Time’ll Tell (lot 253) to R and D Runciman Perthshire. Average £360.45

Ram lambs continued the trend in the male section with many lots being hard to sell topping the trade at 1020gns was a lamb from C and S Rae Dumfries Wallacetown Woodward (lot 354) selling to J Wyille and Grandaughter Grange Over Sands. Followed by two at 1000gns including the Reserve Male Champion from T and S Donnelly Canonbie Saltur Willford (lot 289) selling to C Gammage Lanark and Broomhill Wiznaeme (lot 308) from L and J Strawhorn selling to JA and R Geldard Kendal. Average £329.78. 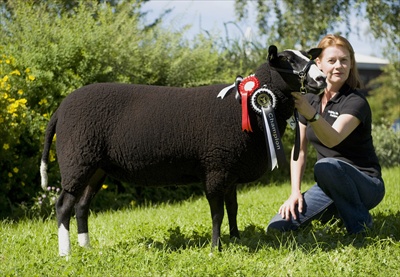