Trade was brisk at Worcester even though the entry was not as large as could be, a good turnout of potential buyers ensured that most went home happy.  Prices were a small improvement on the averages from Carlisle the previous week.

The Supreme Champion Berrington 106T bred by Heather Blease, headed a strong showing of shearling ewes setting the day off by reaching 480gns.  This was followed by another from the same flock reaching 380gns. In all, the shearling ewes made an average of £347.     Including the non MV the  average was £247

In the Ewe lamb section a lamb from R Knowles gable west flock reached 480gns and an average of £227.was achieved in this group

The only shearling ram forward was Sam Inns with Fosseway Trail- Blazer reaching 980gns. With an average of £483 including the none Mv

Heather Blease again led the way in the ram lamb class with Berrington Wurlitzer reaching £650gns followed closely by Beeston Waiter from A Maxwell Smith at 640gns.  The class reaching an average of £406.50.

Non MV Rams were header by S Hulbarts Hilldown Titan at 250gns with an average of £210 whilst a Shearling ewe from the same flock reached 300gns. The overall average for a non MV  Shearling ewe was £199 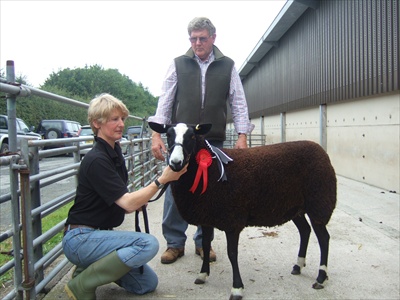